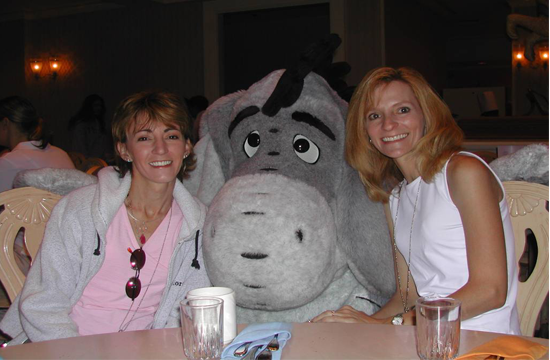 The author and her sister at Walt Disney World.

So where are the kids?” the bellhop asks, placing our luggage in the room and peeking down the hallway as if he expects three children to come bouncing around the corner.

“Ah, that’s the beauty of it!” my sister says, a wide grin on her face. “They’re at home with their dads, and we have the whole weekend to ourselves!”

Admittedly, it does seem a bit strange to come to Walt Disney World Resort without our children. After all, my sister, Debbie, and I are very responsible moms. We cart our kids around to school and soccer practice, help them with their homework and work demanding jobs, as well. We’re not the kind to abandon our posts lightly.

Yet even moms need a break sometimes—and who says that Disney World is just for kids?

Opened in 1971, the Orlando-based attraction has grown into a world of its own, including four theme parks, six golf courses, two water parks, two spas and 22 resort hotels. In addition to the millions of families who visit each year, the park attracts many vacationing couples and groups.

Even if the kids are along on your trip, you can still sneak in an evening of grownup time. Disney’s themed childcare centers can entertain your little ones for a few hours while you enjoy a night on the town.

My sister and I actually have three luxurious days to ourselves, and the thought makes us as giddy as schoolgirls. The question is, where do we begin?

We must be young at heart, because the first thing we do is head to the Magic Kingdom . There is still something magical about seeing Cinderella’s Castle and all the hustle and bustle of Main Street—even if you’re well past legal drinking age.

At first, Debbie and I peruse the resort shops (not having to worry about any little ones getting lost), and then we ride all the roller coasters we want (yahoo!). Finally, we stop for an unhurried Italian lunch at Tony’s Town Square Restaurant near Main Street. After a tasty three-course meal, my sister tosses her arm over the back of her chair, leans back and sighs: “This is relaxing.”

Yet I’m only beginning to unwind. After our morning at the park, we head back to the Grand Floridian Resort and Spa, a Disney property that hearkens back to the Victorian years. With its turn-of-the-century design and high-buttoned style, the Grand Floridian offers the comfortable experience we’re looking for. Best of all, there’s a full-service spa onsite.

So it should be no surprise then that we spend the afternoon under the skillful hands of Disney massage therapists. My sister decides on a Swedish treatment, while I choose Shiatsu. Soothing music and calming aromas fill the candle-lit rooms, and my stress seems to melt away with each minute.

An hour later, Debbie and I walk out feeling like wet noodles. “Now this is relaxed,” I tell her.

Now, though, we’re hungry. While Disney World has plenty of child-pleasing restaurants, we want to eat somewhere that doesn’t involve intergalactic spacemen or anything with a line. Fortunately, Disney has more than a dozen restaurants throughout their themed resorts.

We decide to go South African. Jiko, The Cooking Place, is an upscale restaurant at Disney’s Animal Kingdom Lodge, an African-themed resort situated on a savannah complete with giraffes and other animals from the Dark Continent. Though we don’t recognize many of the dishes, the cuisine is delicious, as are the South African wines we sample.

After a good night’s rest, we’re eager for more fun, so it’s off to Disney’s Typhoon Lagoon Water Park to snorkel with sharks. The 56-acre park has a watershed mountain with eight twisting-and-turning water slides and roaring streams, plus a huge wave-making lagoon.

And the sharks? They can be found at the Shark Reef. Since I’m a sucker for any kind of dare, I don a snorkel and fins and meet the leopard and nurse sharks up close. Being Disney sharks, they are quite well behaved, and I swim across their lagoon again and again.

Certified divers might want to dive instead at Epcot’s Living Seas, a six-million-gallon aquarium which is home to coral, sea turtles and hundreds of other fish. Disney’s twice-daily DiveQuest program includes gear and expert-led tours. Guests without scuba certification can experience the Living Seas using scuba-assisted snorkeling gear.

But I’m happy with the small sharks at Typhoon Lagoon. Eventually, I tire of fish, so Debbie and I lounge under big white umbrellas, reading and dozing off. “This is heaven,” I hear her mumble before her eyes close.

We don’t sleep all day, though, because there’s lots more fun on tap. While I’ve been known to tell my husband to “slow down!” when driving, that doesn’t mean I don’t enjoy an occasional fast pace. At the Richard Petty Driving Experience at Walt Disney World Speedway, guests can get behind the wheel of a NASCAR-style stock car. You can ride shotgun with a professional driver or drive yourself (after a short training session, of course).

We’re brave, but not that brave. So Debbie and I opt to ride shotgun, one at a time. I’m given a driving suit and helmet, and then I climb in through the window of the car. The engine guns and we’re off in a flash. The tight corners are unnerving, and my stomach does a flip as we reach 150 mph. Still, it’s an exhilarating thrill.

We spend our last day at Epcot, my favorite Disney Park. The “World Showcase” offers guests a trip around the world, with restaurants, shops and attractions from 11 different countries. I buy some dinnerware in Japan, eat a decadent pastry in Norway and pick up some chocolate in Germany.

As we walk through China , a delicious smell fills the air. It is the Nine Dragons Restaurant, which serves authentic dim sum every day. The dishes look so good that we have to stop to try it for ourselves—and we’re not disappointed.

While the parks bustle with activity during the day, Disney’s Pleasure Island comes alive at night. It’s there that we head for our last evening out.

The six-acre entertainment complex is home to shops, boutiques and restaurants. Pleasure Island’s West End Stage has drawn top acts like Garth Brooks and Bryan Adams, but the Island’s most popular attractions are the themed nightclubs.

Our first stop is the Comedy Warehouse, where improv jokes are flying fast and furious onstage. From there, we make our way to 8 Trax, a ‘70s and ‘80s-themed dance club.

Although it’s only 9 pm, the dance floor is crowded with couples, some young and some old. I’m also surprised to see groups of women out on the dance floor.

“My friends and I always come to Disney World for our annual girlfriends’ getaway,” one woman tells me over the pounding music. “It’s a fun place to relax.”

Debbie and I join the throng of dancers, moving our way across the floor as we relive some of the greatest hits—and the not-so-great hits—of the ‘80s. My sister has a wide grin on her face and I’m sure I do too.

After all, even grownups need time to play.