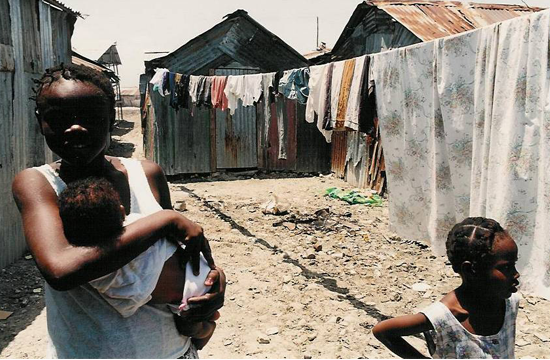 Hope for Haiti, from The Chicago Tribune. Photo by Janna Graber

By Janna Graber
From Chicago Tribune

Although Haiti is a Caribbean island, everyday life here is a far cry from a tropical paradise. The average annual income is under $400 a year, and 75 percent of the population live in abject poverty, according to U.S. government data. With a national unemployment rate of over 60 percent, starvation is a daily reality.

About 8 million people live in this country the size of Maryland; almost half of them are under the age of 14. Most will not live past the age of 53.

Life for women in Haiti is especially difficult. While international women’s rights groups recently celebrated a landmark UN agreement that set women’s equality as a goal, there is still a long way to go before equality is a reality here.

Many of the poor live in Cite Soleil, the country’s largest slum. The French name means “city of the sun” but the area’s residents live in squalor.

Open sewage and knee-deep garbage are a common sight in this dense shantytown that is home to some 300,000 people. There are times when the stench is overwhelming. Flies are everywhere.

Children play in the dirty river that winds through the area, their protruding bellies evidence of malnutrition. Others run naked and barefoot through alleys of tiny homes made of cardboard, tin and plastic tarps. Many of the homes are so small that family members must take turns sleeping.

It is a difficult place to raise a family, but most women do the best they can. In the shadows of one of the shanties, a mother braids her daughter’s hair using colorful barrettes and ties. The girl’s clothes, while torn and tattered, are clean and bright. A sense of pride and dignity seems to mask a sense of desperation just below the surface.

A woman’s role in this society depends upon her economic status, says Haitian-born Michel Laguerre, a professor of Afro-American studies at the University of California, Berkeley. Well- educated women–such as Ertha Pascal-Trouillot, who became the country’s first woman president in 1991–may enjoy prominent roles in Haitian society. But for the very poor, which is the majority of women, roles are limited to domestic work, field work, or selling meager supplies at the market, says Bryant Freeman, director of the Institute of Haitian Studies at the University of Kansas in Lawrence.

“Women do most of the work in these areas,” says Freeman, “but they don’t make the decisions.”

Some women must share their husbands with other women. “If a woman doesn’t give her husband a son, it’s culturally acceptable to find another wife in the hopes of having a boy,” says Laguerre. “It’s protection for the family. They hope the boy will grow up to get a job and then take care of the family.”

Child slavery is a sad reality. A 1998 UN study found that more than 300,000 children work as domestic slaves in Haiti. Most of these so-called “restaveks” are girls who were taken to do domestic work, says Laguerre. Many of these children were given up into slavery by their parents in the hope that the child would at least have food to eat.

Rape and violence against women are widespread and often go unreported. Rape as punishment for political activity on the island has been documented by government and university studies.

Additionally, a 1996 report found that 7 out of 10 Haitian women said they had been victims of violence, with the most common form being sexual assault.

“The greatest difficulty Haitian women face is being perceived by men as usable and abusable,” says Terry Rey, assistant professor of African and Caribbean religions at Florida International University in Miami.

Rey, who has conducted research on rape in Haiti, says the culture and laws are favorable to men. “A Haitian man is excused if he kills his wife after catching her in the act of adultery,” says Rey. Yet the same crime is punishable if committed by a woman, Rey adds.

Surrounded by the harsh reality that is part of so many Haitians’ daily lives, it is easy to understand why many risk their lives each year traveling by boat to the United States where jobs are available.

But some Haitians believe that there is hope for change in their country. Several women’s groups have been working to improve life here.

“These women’s groups are a major avenue for social change in Haiti,”says Laguerre. “They are not just simple local organizations, but have global preoccupations. Opening up to global influence is forcing change on the local scene. For example, women’s groups in New York and Miami communicate via Internet with women in Haiti. I see this as a hope for Haiti.”

And individual women–from America and from Haiti–are working to nourish this hope. Susan Krabacher, of Aspen, Colo., was moved to found a non-profit agency after she saw a TV program on Haiti (see related story).

Haitian native Marie-Carmel Lafontant has spent a large chunk of her life working for change. Lafontant founded the Haitian Center for Research and Action toward the Advancement of Women in 1975 in an empty yard in Port-au-Prince. She also runs women’s clubs in Cite Soleil. A teacher, author and former UN delegate, Lafontant has devoted her life to educating Haitian women and improving their lives.

“My dream is to help the women of Haiti become more conscious of the important roles they can play in peace and progress,” says Lafontant.

It’s no easy task to work for change, says Lafontant, but she believes it is a must. Lafontant was 20 years old when she got a teaching job in a tiny school high in the Haitian mountains. As she walked the three hours it took to reach the school each week, she often talked with the women in the nearby villages. They told her of their hopes and fears–fears that their daughters would be exploited as they were, and that their sons would be lost to violence.

Lafontant made a vow that she would work for change. After an American visitor discovered a textbook she had handwritten, Lafontant eventually got the chance, through U.S. government channels, to study in America. Since the late 1950s, she has published numerous textbooks.

“Education is the key to change in Haiti,” says Lafontant. The center works with about 300 women a year, teaching them marketable skills such as typing, sewing, or farming, and providing education in basic hygiene, literacy or population control.

“Our goal is to educate and train young women, and then give them income-generating projects,” says Lafontant. The center also helps women secure funding to open small businesses, and learn new skills at the center’s computer lab.

With the help of Food for the Poor, a non-profit organization that manages numerous humanitarian projects in Third-World countries, Lafontant has helped many Haitians become self-sufficient.

She tells of one coastal village that had lost the tourism trade it relied on. Lafontant suggested they start a fishing co-op and conducted classes on how to run such a business. With donated goods from Food for the Poor, the villagers built six fishing boats and began their co-op. They now sell fish back to Food for the Poor for its feeding centers and to various stores around the country.

In the face of the hardship of living in Haiti, these are the people who make it all worthwhile, says Lafontant.

“Many (Haitian) mothers work so their children will someday have a better life,” Lafontant says. “Although things might not improve for them personally, their hope is their children.”